Note: this is the first part of a five-part course in moveable ukulele chords, originally published in Dutch. The other parts will follow shortly.

You can find ukulele chords in chord tables which you can find on the internet. But there are many kinds of chords like major, minor, 7th and many more, each in twelve different keys. And you can play each of these chords in a number of ways, resulting in hundreds of ukulele chords. You could learn all of these chords or use a small selection of ‘basic’ chords. A much better solution is to know what you’re doing, and learn a couple of basic shapes. Combined with a little bit of musical theory you can then find all the chords and variations you ever need yourself. In this series I’ll show you how to do just that.

If you want to know how to make your own chords, you first need to know what they are.

A chord consists of different notes played at the same time. Music notes are ‘numbered’ with the letters A through G. After G we get back to A. The famous ‘do-re-mi’ scale starts at C, so C-D-E-F-G-A-B-C. These notes correspond to the white keys of a piano keyboard. Between some of the white keys is a black key. You can consider the black key to be either a higher note than te white one to the left, or a lower one than the white note to the right. Raising a note (making it higher) is notated by a sharp sign (♯), lowering it by a flat sign (♭). For example the black note between C and D is either a raised C (so C♯ or C-sharp), or a lowered (flattened) D (so D♭ or D-flat). Which of the two names you have to use isn’t that important for the moment. There are also black keys between D and E, F and G, G and A, and between A and B. At two places there isn’t a black key between the white ones: between B and C, and between E and F. It’s important to remember this keyboard layout, since we’ll need this order of notes later on. 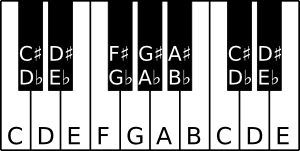 Using the sharp sign for now, we have a sequence of 12 music notes: C-C♯-D-D♯-E-F-F♯-G-G♯-A-A♯-B. After that it starts again at C. For music theory, all notes are equally important and the steps between two consecutive notes is the same. For example, from C to D is two steps (C-C♯-D), and from E to F is one step. If you’re building a chord, the most important thing is the number of steps to get from one note to the next.

A chord consists of different notes sounding simultaneously. The C major chord consists of three notes: C-E-G. A chord is named after the ‘root’, which is more or less the starting note. In this case a C. If there’s nothing behind this root, it’s a major chord, so if you see a C chord it is actually a C major chord. For other types of C-chord there’s an addition to the root, like Cm for C-minor or C7 for C-7th. We’ll get to that later.

A major chord consist of the root (the starting note), then the note 4 steps further, and finally the note another 3 steps further. Have another look at the piano keyboard or the following note sequence:
C-C♯-D-D♯-E-F-F♯-G-G♯-A-A♯-B.
For a C chord (i.e. C major) we start at C (the root). Take four steps from C to end up at E, and take three steps from E to end up at G. So the C chord consists of the notes C, E and G.

Another example: for an E chord take 4 steps from E to G♯ and another 3 steps to B. So the E chord is E-G♯-B. And what about the D♭ chord? The D♭ key is the same as C♯, so taking 4 and 3 steps we get D♭-F-G♯. (Actually we should write D♭-F-A♭, but that’s not really important for now.)

Sometimes you’ll notice an ‘m’ at the end of a chord symbol. This ‘m’ indicates a minor chord. Instead of the 4-3 steps of a major chord, a minor chord consists of 3-4, so first three steps and then another four. For an Em chord (E-minor) start at E, take 3 steps to G and another 4 to B. So Em is E-G-B. For Am you’ll find A-C-E (after B start at C again).

Now you know the recipe to find the notes you’ll need for any major or minor chord. In the next parts we’ll learn how to play these chords on the ukulele. We’ll also learn other types of chords, so you won’t have any problems when someone asks you to play an F♯sus4.